What do the NIJ Body Armor Levels Mean?

What Do the Nij Body Armor Levels Mean?

No level of body armor will turn you into Superman (or Superwoman), but getting the proper armor can protect and provide an improved level of safety that you can rely on to be there for you when it matters the most.

This peace of mind will enable you to go about your business or carry out your job with an enhanced level of self-confidence and offer a consistent and reliable level of protection in a worst-case scenario.

But choosing the right type of body armor for your goal, job, or even anticipated threat level can be a challenge. Body armor is rated based on NIJ levels that seem like a foreign language to those unfamiliar with what these ratings mean and how they work.

In this guide, we’ll explore how bulletproof vests are tested, the different levels of NIJ body armor, and what they represent.

The NIJ protection levels represent the type of ammunition / ballistics that the body armor is designed to resist when facing threats.

Note that the National Institute of Justice doesn’t test the product’s individual materials, but rather what the armor is capable of protecting against.

A bullet cannot make a hole or pierce the vest for armor to meet NIJ standards. The vest also needs to protect against blunt trauma, such as that from a swung pipe or baton.

While the basic protection levels go up to five, you may come across a Level I armor, which no longer meets NIJ standards as it has low caliber resistance., but it exists in the used market.

Checking the NIJ body armor levels is essential as it indicates the type of threat a specific armor protects you from. Luckily, the National Institute of Justices has created a chart that summarizes the standards they use to certify body armor performance against the different levels of threats. 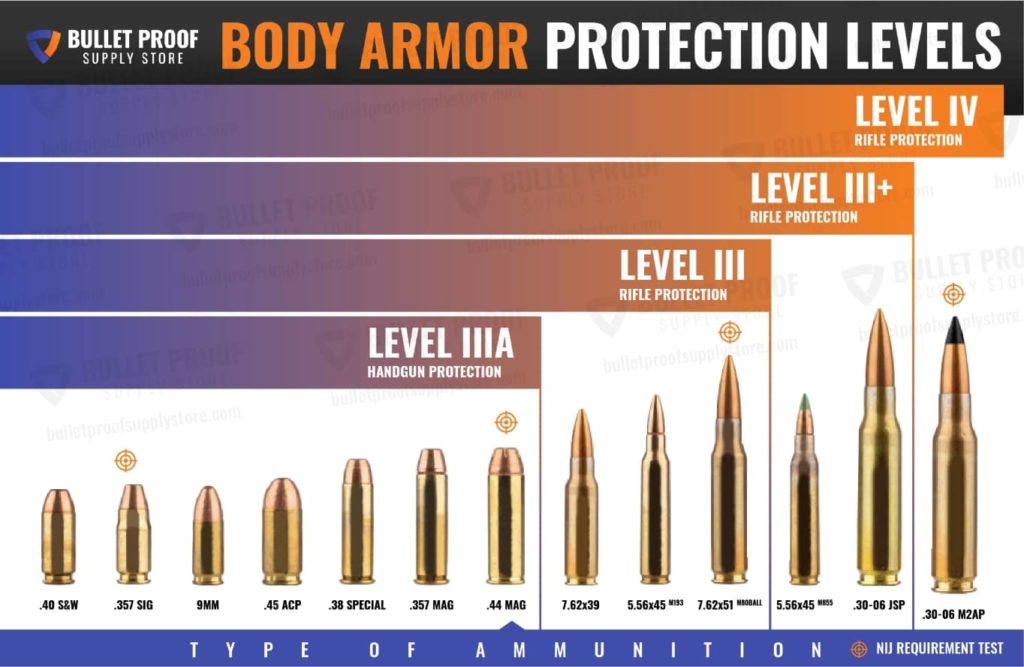 NIJ Level IIA is the level ascribed to any soft body armor consisting of layers with high-strength woven fibers. Body armor that falls under this rating generally weighs less than ten pounds, making it maneuverable and agile.

This type of body armor is designed to stop a .9mm FMJ round at 1165 ft/s. It’s also been tested with a .40 S&W Full Metal Jacket at 1065ft/s. It’s common in soft body armor vests used by civilians and law enforcement officers looking for protection against low-impact ballistic fire.

Unfortunately, despite Level IIA body armor being flexible and lightweight, it won’t stop a high-velocity round and leave bruising when shot. After Level IIA is the NIJ Level II, it’s also a soft body armor but slightly heavier and thicker than is Level IIA body armor.

Measuring 5mm thick, this body armor is designed to protect the wearer from .9mm FMJ traveling at 1245ft/s and a .357 Magnum Jacketed Soft Point at -1.430ft/s. Level II also protects against most standard handgun rounds.

Similar to Level IIA, Level II is also simple to conceal, comfortable, and light. However, the major difference is that it provides better protection against blunt force trauma. That includes any trauma caused by the kinetic energy of the round hitting the vest or plate, adding increased protection against tissue damage from blunt forces.

The primary users of Level II armor are the police and private security.

Bulletproof vests under Level II have layers of bulletproof or other aramids.

On the downside, Level II can be challenging to take off and put on quickly if worn concealed. Level IIIA armor is versatile while offering a significant level of protection.

NIJ Level IIIA is capable of stopping .357 Sig FMJ flat nose bullets that travel at a speed of -1470ft/s and .44 Magnum Semi Jacketed Hollow Point rounds at 1430ft/s. The armor also protects against shotgun slugs and most handgun rounds.

Vests under this rating deliver the perfect balance between comfort and protection. As a result, IIIA is considered the highest level of soft body armor.

However, it’s common to find ballistic shields and rigid armor plates with an NIJ rating of IIIIA.

Level IIIA is heavier than Level IIA and II, but you can still conceal it. You’ll find it in bulletproof backpacks and bulletproof vests. NIJ Level III plates are engineered to stop six spaced hits of 7.62 x 51mm NATO Full Metal Jacket traveling at a speed of 2,750 ft/s. That is similar to the .308 Winchester hunting round, a round common in hunting rifles designed to be a ‘one shot one kill’ platform.

But that’s not all. Level III rated body armor is also tested to multiple hits of six rounds on a single plate. Unlike the previous levels, Level III is rigid, making it less agile, and somewhat challenging to effectively conceal.

However, the tradeoff made with heavier armor is that it offers a greater degree of protection than soft armor, and is thus more advisable in higher risk situations where the chance of high velocity and/or rifle round impacts are a possibility.

You may also come across rigid armor rifle plates labeled as Level III+. Again, this rating is not on NIJ’s list of standardized ratings, but the ‘+’ is indicated for armor is designed to protect from additional specific threats, such as that from an M193 or M855.

Level III body armor plates are available at varying price points depending on the rifle plate’s material and weight. You can find expensive plates made from ceramic or polyethylene that weighs close to three pounds, making them lightweight and easier to wear for longer periods of time or when traveling any distance on foot is required. Cheaper plates are heavier and are typically made from steel, and often weigh upwards of up to 10lbs. Level IV is the highest rated hard armor plate under NIJ 101.06 standards. Any armor under this rating provides ultimate protection against gunfire and a wide range of ballistic projectiles.

One thing to note is that a Level IV body armor is not always better than Level III armor, and which is most appropriate for your needs depends on your assessed level of threat and other factors.

Level IV plates are only tested to stop a single shot, unlike a Level III hard armor plate that’s been tested for six shots.

Of note is that Level IV armor lacks flexibility, and its weight can make it uncomfortable to wear for long hours. However, military officers and other security forces are issued with Level IV body armor. It requires some form of training to put on and is designed for a combat situation. Which Body Armor Level is Best?

Understanding the different protection levels is essential when assessing your needs for personal protection.

It’s critical to consider where, when, how, and under what conditions you might need to use the body armor.

Will you need to move frequently while wearing the armor? Over what distance?

Everyone in tactical situations understands that EVERY OUNCE MATTERS. You may need to sacrifice protection for weight in scenarios where you need to remain lightweight and/or preserve energy.

The flexibility of soft body armor enables you to be more agile, resulting in increased range of motion, faster movement, precision and less fatigue.

Perhaps the most obvious, what type of ballistic threats do you anticipate needing protection for?

How important is it that your body armor be concealed or otherwise unnoticeable to the untrained eye? #: WHEN USED IN CONCERT WITH THE NFCAS STERNUM PLATE

What Are Nij Standards, and Why Are They Important?

The National Institute of Justice comes up with equipment standards that address the needs of law enforcement and other criminal justice agencies. These standards are put in place to ensure that the equipment is reliable, safe, and works according to the specified minimum requirements.

Checking the NIJ body armor level is essential as it indicates the type of threat a specific armor protects you from. Luckily, the National Institute of Justice has created a chart that summarizes the standards they use to certify body armor performance against the different levels of threats. How Does Nij Test Body Armor?

NIJ’s testing is detailed and rigorous. The testing involves both new and used vests, shots from different angles, and various sizes of each vest to make sure that the armor meets all the requirements.

For NIJ to certify any body armor, it needs to stand up to six shots on a single plate with the corresponding ammunition for the plate’s level.

The testing protocol applies to all vest levels. The difference is in the type of caliber that is fired into the vest. Note that for the shots to count, they need to be made within a specific border for the plate.

There are certain situations where having body armor can save your life. In today’s socially charged climate, the risks have never been higher. Incidents from riots and protests, to crime and aggression are on the rise at home and around the world. Body armor offers a way for first-line responders and civilians alike to take ownership of personal protection and safety for themselves and those they care about.

The higher the NIJ body armor rating, the more protection that armor provides. However, as the rating levels increase, so does the rigidity and weight of the armor, potentially reducing mobility and agility, and increasing the chance of fatigue.

As such, finding the right balance between ideal protection and other needs is an important consideration, and one that is unique to each situation and individual.

By using the NIJ rating guide, in conjunction with the considerations detailed in this guide, you can best assess the types of body armor and respective NIJ ratings that are appropriate for your needs.

From the field to the range, soft and hard body armor is a value add to your tactical and defensive gear that you simply can’t put a price on. It may very well one day save your life or the lives of the ones you care about most.